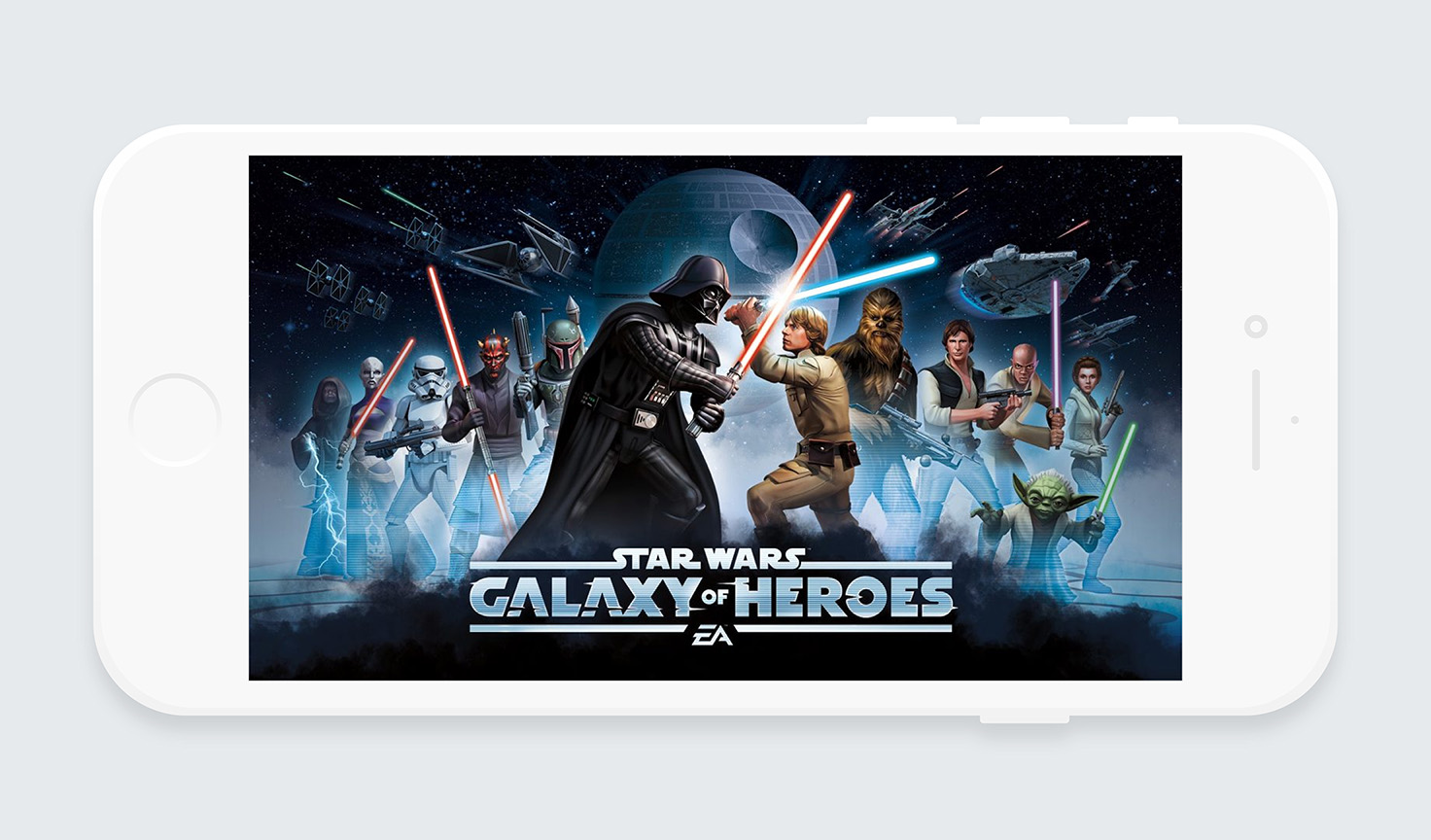 With Capital Games’ growing success on Heroes of Dragon Age, our first entry into the growing CCG (collectible card game) genre on mobile platforms, the studio earned favor to work on another EA intellectual property. Having just attempted a Mass Effect mobile title, it made sense to try to put our capabilities towards a science-fiction title in another galaxy, far far away. However, the path to successfully launching a Star Wars title was not going to be easy given the history of studios that have tried!

The intention of our studio executives was to emulate the successful framework of our Heroes of Dragon Age title and to innovate upon the system with nearly a year of user economy understanding and its strengths / shortcomings.

The entire studio was at odds when we first approached some of the fundamental pillars of the project. There was a vast sea of references in the Star Wars canon, and everyone had their own idea of what the 3D characters would look like, which movies or television shows we would focus on and which we might exclude, and even game-play mechanics based on obscure movie events.

For the user interface, I started to draw references from all the movies (Episode I – VI) trying to capture all the analog / digital, visual language that was established by the folks at Lucasfilm. There was a clear stylistic divide between Episode IV – VI and Episode I – III that I was forced to traverse, but the newer movies had the most compelling variety and quantity of examples.

Additionally, the UX Designer and I worked together to provide concepts of what the game could look like if it were to be played in portrait mode and had a Light Side and Dark Side experience. However, the Art Team ultimately proved that having both visual options would quadruple the size of the application download as well as the time to develop the assets properly.

For the first couple of projects milestones, the style guide I had initially settled on with the Art Director (based on Episode I – III) had many visual layers and saturated colors that distracted from content and information which was not the result I intended but the production speed to meet our production gates did not allow for much other team feedback and iteration time – the studio was in an unofficial competition with two other mobile studios within EA for the Star Wars intellectual property.

Capital Games ultimately won EA’s approval over its two other mobile studios, and Disney only allowed for one Star Wars title per platform a year which gave us more time to polish up all aspects of the game. At this point in time, our Art Director moved on to another studio/project which left us searching for new talent to replace him – the studio found someone in a timely manner and also took the opportunity to hire a UI Artist to support the work load of upcoming features.

I worked closely with the Producers, UX Designer, Art Director, Art Lead, and UI Artist to iterate upon a much cleaner style guide for the final production assets that actually looked closer to my earliest explorations. The simpler visual hierarchy allowed me to spend more time iterating on some of the more complicated visual design issues such as the battle system HUD and buttons.

Capital Games began early development on this Star Wars title in mid April 2014 and presented its official demo that October to the entire EA mobile studios group. It was not until the next milestone in mid December that the studio earned the privilege of continuing to develop the project as the only mobile developer allowed to launch a Star Wars title in 2015. The official launch of Star Wars: Galaxy of Heroes was November 24, 2015 on both iOS and Android devices just weeks before the release of the movie, Star Wars: The Force Awakens.

Since its launch, Star Wars: Galaxy of Heroes was an instant favorite with the fans and quickly found its place at the Top 10 Free-to-Play games in the App Store and Play Store. For all the hard work everyone at Capital Games put in, we saw new rewards each passing week: EA had devoted more marketing efforts for the game which allowed for superb ads on billboards, movie screens, YouTube, and even mobile device wraps. We all witnessed random people on the streets playing the game, and had friends and family asking for gameplay advice. In return, the studio continues to supply its audience with rich content and new features each month. I personally could not be more proud to have worked on such a wide reaching product!